Since 2013, The Portal Trust has helped to support the London Music Fund by sponsoring twelve four-year music Scholarships for children whose families are struggling to pay for music lessons.

Sarah Akunjee, an 11-year-old saxophonist from Wandsworth, received one of these Scholarships in 2018.

We caught up with Sarah to find out how her Scholarship has been going, the difference it has made to her and what her ambitions are for the future.

Established in 2011, the London Music Fund aims to ensure that every child with significant musical ability, enthusiasm and commitment to learning has the opportunity to develop their potential – particularly those whose families are unable to pay for tuition fees.

Sarah has been with London Music Fund since 2018 and is nearing the end of her four-year Scholarship. Her interest in music has existed long before 2018 however, with her first ever saxophone being a small toy instrument with brightly coloured notes when she was very little.

Since upgrading to the real deal, Sarah’s now working towards her grade three exam and her favourite piece to perform is ‘Never Gonna Give You Up’ by Rick Astley. She particularly enjoys ‘Rick-rolling’ people by unexpectedly playing the song when they least expect it! 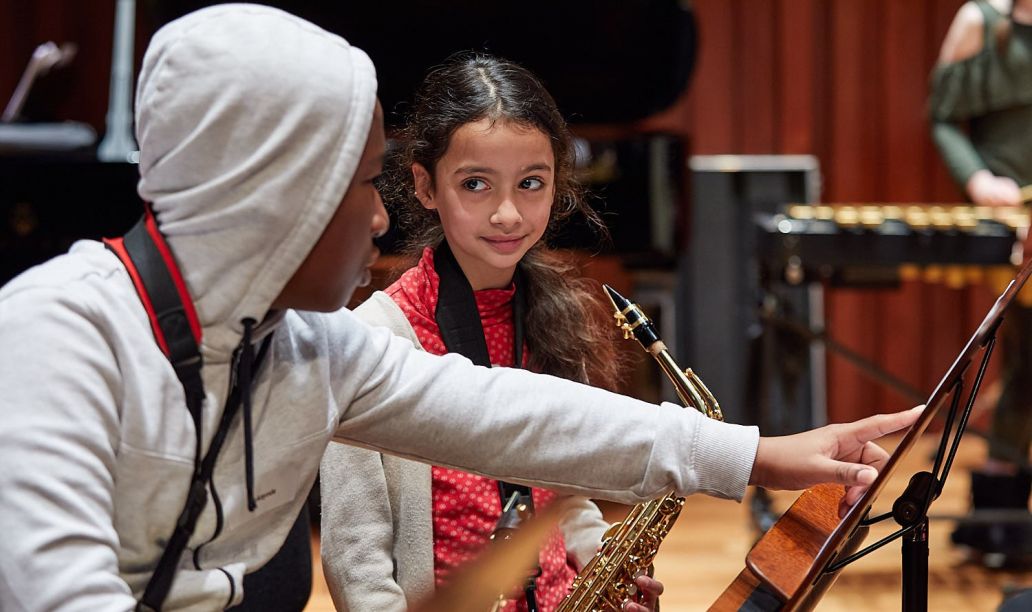 Sarah told us that her highlight of the Scholarship has been making so many new friends. Her favourite experience however was definitely playing at the Royal Academy of Music for the London Music Fund’s 2019 Gala, where the Scholars performed the world premiere of composer Deborah Pritchard’s piece ‘Above Earth’.

Sarah’s local Music Service, Wandsworth Music, manage her Scholarship and help ensure she gets as much out of it as possible. Sarah’s motivation and excitement to learn have been greatly impacted by Wandsworth Music, with Sarah telling us ‘all the teachers are really nice and they make it really fun to learn!’

Alongside receiving individual music lessons as part of her Scholarship, Sarah also takes part in many extra musical activities, including concert and jazz orchestras and a pop band. Sarah enjoys participating in all these groups as she loves trying out different styles of music.

She particularly enjoys improvising in Jazz orchestra as she feels she can really express her creativity and experiment with the music. In fact, one of the things Sarah told us she is most proud of achieving during her scholarship is doing her first improvisation in her first jazz concert.

‘I managed to do my first improv during a piece called Second Line. I think it ended up going really well and sounded really good. It’s one of my favourite achievements!’

Playing in these orchestras has also helped Sarah to ‘enjoy playing in a team more’ both in PE lessons and family games at the park. She also thinks her theory lessons have helped her in other areas of her education.

‘I’m definitely getting better at theory, it’s not always my favourite thing to do but it’s starting to make me enjoy maths more, as I think it is a lot like maths. 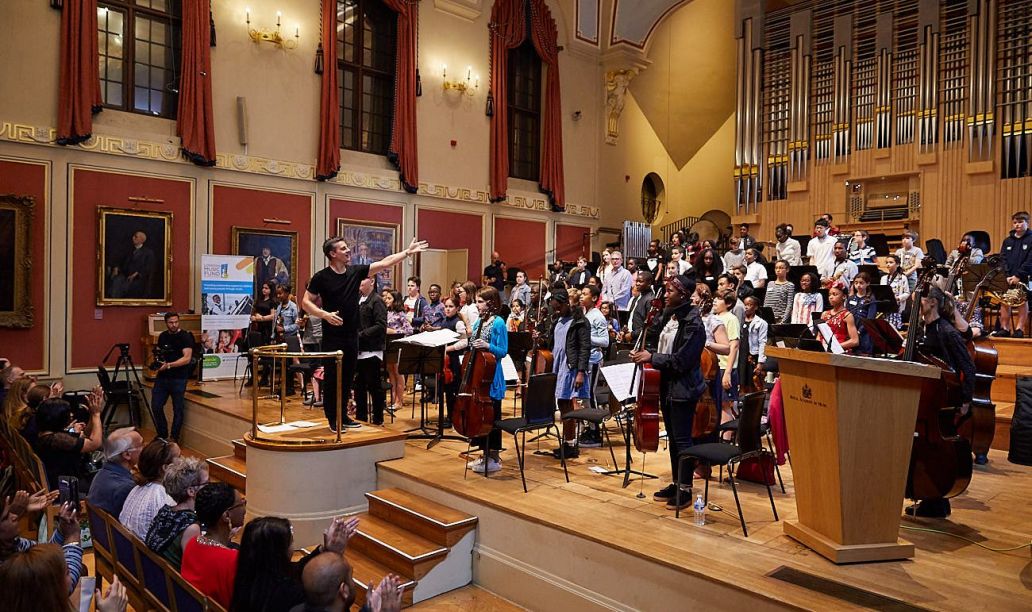 Image caption: Sarah rehearsing ‘Above Earth’ at a London Music Fund Playing Day with brass and woodwind Scholars in advance of the July Gala performance. 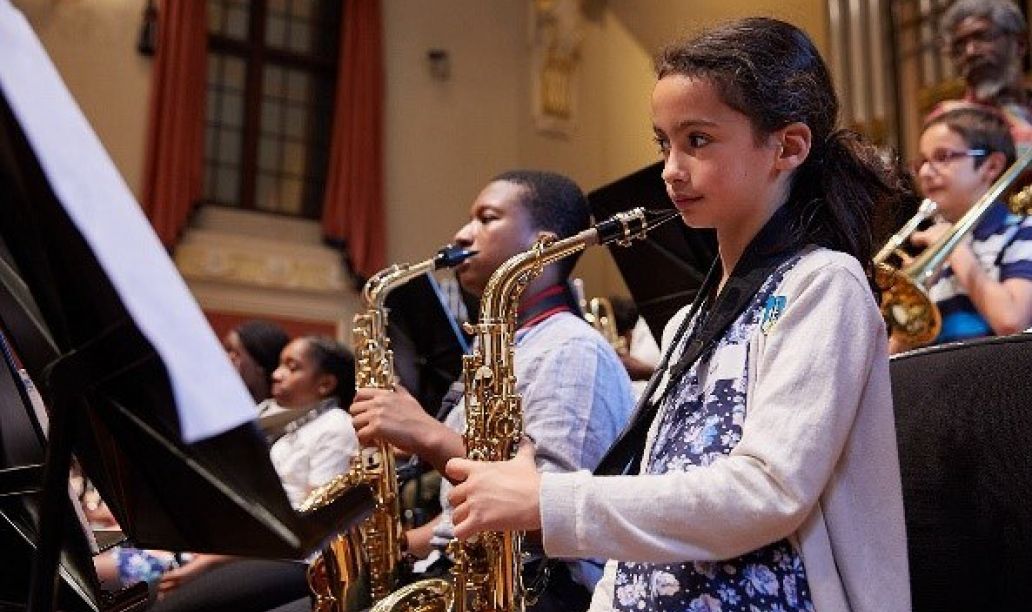 Sarah’s mum Celine commented on how ‘Sarah got a new enthusiasm to learn’ following being awarded with a Scholarship and that it helped her to put any ‘negative feelings’ about school to the side and have ‘a fresh start’.

Sarah believes the Scholarship has also helped her not to question her own ability and to believe in her potential more.

‘I don’t always worry too much about whether I really am good at this or whether I really can play the saxophone. I know that there are areas I need to improve in of course, but I think that if someone was happy to give me a Scholarship then I must be good and that makes me feel confident and practice even more.’

Sarah’s confidence has been demonstrated on several occasions, including at the first London Music Fund ‘Playing Day’ since lockdown where Sarah volunteered to read a text over music celebrating the NHS in front of everyone (professional musicians and Scholars alike!).

Music is very important to Sarah in all aspects of her life. Although she works hard practising her exam pieces, she also enjoys experimenting and having fun with her sister and friends.

Sarah’s mum shared that often after music lessons, Sarah and her friends will ‘go get their instruments out again and have so much fun just playing together and seeing what funny sounds they can make.’

I think that if someone was happy to give me a Scholarship then I must be good and that makes me feel confident and practice even more.

Looking forwards, Sarah told us she would like to learn to play the tenor saxophone and to get a distinction in one of her exams. ‘All of my grades so far are merits, which is really good and I’m very happy with, but I would love to get a distinction.’

She would also like to complete all her grades, start a band, go on a world tour and possibly teach music when she is older.

Georgina Skinner, the Programmes Manager for London Music Fund, commented that ‘Sarah is a perfect example of a young musician who has worked really hard and made the most of every opportunity she has been offered. We’re so proud and are really excited to see what Sarah does next.’

We’re incredibly proud of Sarah and are very pleased to support both her and the London Music Fund.

If you’d like to know more about the London Music Fund, make sure to check out their website here.